What to Expect on This Journey

This article explores fields of study using my own experiences of getting into multiple fields. My proposition of this article is simple: every field takes their claim of “everything”, so it’s best to understand as many fields as possible. Said shortly, Everything is everything. My experience is that fields of study often seek to look at life through the field’s lens. For instance, this article that claims “everything is physics”, or this Great Courses course that asks “Is Chemistry the Science of Everything?”. Honestly, it isn’t hard to find an example for whatever your field of study or passion is.

My point is not, however, to analyze and argue each field’s claim to “everythingness”. Instead it is a warning at rejecting other fields for the sake of your own, and a celebration of mixing many fields into something that, too, will take it’s claim at everythingness.

How We Got Here

There are divergent paths that brought me to this paradigm of everything being everything. The most recent path being a talk by Dr. Russell Ackoff, a leading voice in systems thinking, among other fields. In this talk he talks about how the education system makes an assumption that “the world works the way a university is”. He goes on to elaborate what he means by explaining that every field has a tendency to “take reality apart into pieces” and that the pieces represent reality.

The other path is reflected in my journey into experience design. Experience design is one of the first fields that I’d grown interested in that admitted that it was inherently multidisciplinary. This appealed to me on a number of levels, the primary one being that as someone who often has fleeting interests, it’d be better if I were to be able to use them, rather than let them go to waste. 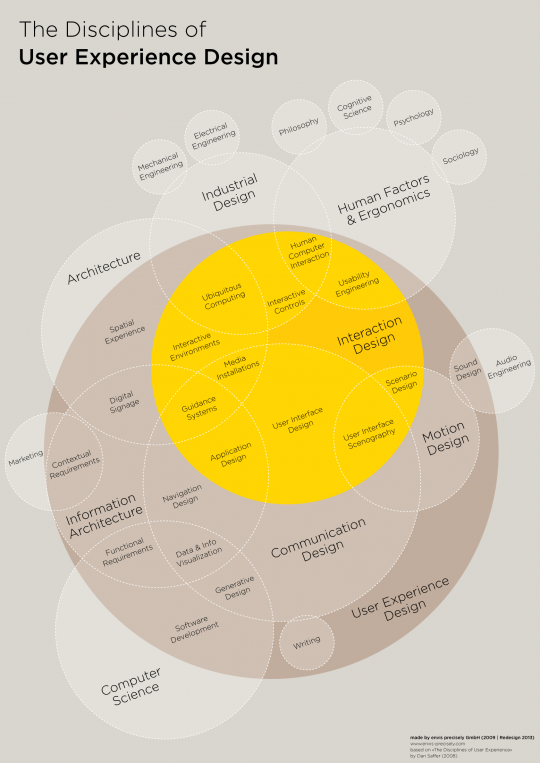 This graphic above, called The Disciplines of User Experience visualizes exactly what I mean (though I understand that it’s not the most intuitive graphic in the world). In fact, I don’t even necessarily agree with where things are placed in relation with each other, but the gestalt perception of the graph, the one that openly acknowledges UX as having parts of its existence rooted in differing fields of study, is exactly what I’m focusing on.

At one point of my life, I was a musician. I played bass in jazz ensembles, I was in the band of an RnB/pop-singer in my local area where we even got to play a gig in Hollywood (not as glamorous as it sounds), I even took music theory classes. In short, I was doing the work of a musician. Most practicing musicians that I ran into during that time looked at their study as “music performance” and left it at that. No one around me bothered to look into the potential benefit of understanding how humankind’s perception of time plays a role in our music listening experience. The concept is too left field to “matter” in music performance.

This should be the part where I say that it mattered to me, that I did x, y, and z, in looking at humankind’s perception of time and learned some grand insight into how humankind perceives music. It’s not though. I thought about it, but it was so different than what everyone else was doing that I didn’t bother going down the rabbit hole. The idea, in short, was not music. The frustration never quite left me.

Where Do We Go From Here?

Luckily, there is already a lot of steam gaining in multidisciplinary movements. One of particular note for me is the book “The Medici Effect” by Frans Johansson. The core of the book is that world changing insights often come at the intersection of fields of study. It focuses both on individuals who were at the intersection of multiple fields, as well as organizations that deliberately try to seize this effect by combining experts of disparate fields together.

But, to be honest, leaving you with a book recommendation feels lame. While, I like the expertise to offer anything prescriptive about “how to live an everything is everything life”. I can leave you with something left field, which is the best thing I can do for you.

We are not organic beings. I mean this in the non-obvious way. Of course we’re organic beings in the traditional sense, but the definition I’m using organic beings is quite different. See, we have this tendency to use digital analogies to compare our human experience. We describe our brain as a computer, which is patently untrue. We so desperately try to describe ourselves with whatever is cutting-edge at the time, and each time it falls flat.

Instead of looking at ourselves as some sort of digital being where we must pursue a single field of interest and provide the highest amount of efficiency possible, let’s look at ourselves and the world around us as organic. There are no fields of study in nature; there is only nature. Our task then is to break down what has been artificially constructed for us and learn whatever it is we want to learn regardless of what field we’re in. Everything is everything, and each “field”, however artificial” will give you an ever deeper understanding of that everything.

This site uses Akismet to reduce spam. Learn how your comment data is processed.